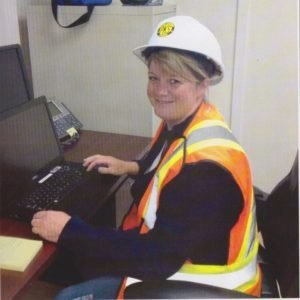 For many Newfoundlanders and Labradorians, the fishery is an integral part of our way of life, and this was certainly the case for Cathy Dimmer. At the age of 16, she went to work at the High Liner Foods fish processing plant in Burin. This is where she remained for the next three decades.

In 2012, the company announced it was shutting down the plant. Cathy was devastated. She, along with many other workers, were placed in a very tough position. “I had no education. I didn’t know where to start or what I was going to do.” Cathy was overwhelmed but determined to find a new career path. She took the initiative and contacted WRDC to inquire about the Orientation to Trades and Technology (OTT) program.

Cathy helped recruit 10 women who had worked at the plant to participate in the OTT program. They received multiple weeks of career development training which included hands-on experience in a range of trades and technology fields, academic courses, worksite tours and industry presentations. As the days turned into weeks Cathy recalls how the women evolved professionally and personally. “You could see the difference in them, they were gaining confidence and became more independent.”

“The OTT program made me realize I could do anything I set my mind to. It also gave me the confidence I needed to obtain my education.” Not only did Cathy receive her diploma in Occupational Health and Safety (OHS) from Keyin College, she also graduated top of her class with the highest academic score … a 93% overall average!

Since graduation Cathy has worked for Kiewit and Crosbie Salamis Limited. She believes in taking advantage of every opportunity available. “If you are in a job and you have the chance to try new things, take every opportunity that comes your way because you never know when you could use that experience down the road…that’s what happened to me.”

Presently, Cathy is working offshore as a painter on an oil rig. She is confident and proud, traits she thanks WRDC for. “OTT showed me what I was capable of, I didn’t realize I had it in me until I went through this program. For anyone interested in trades or technology, apply to this program. You never know what doors it will open for you or where it’s going to take you. The sky’s the limit!”